For I know the plans I have for you,” declares the Lord, “plans to prosper you and not to harm you, plans to give you hope and a future. -Jeremiah 29:11

Lord, give me strength, and then some.

At 6:10am I opened Charlie’s bedroom door, his eyes shot right open before I had a chance to speak or turn on a light. I hugged him and asked if he was ready for his first day of Kindergarten! -I have never seen that boy get dressed and ready to leave the house so quickly in his entire life!

He was so anxious he declined breakfast, as I insisted he needed to have at least something. He repeatedly asked to go. He sat ready with his backpack in anticipation that Mya and I would be ready sooner than later. He was ready. I was not.

We embarked on the 40 minute drive to school- which allowed for asking, “are we there yet?” at least 20 times… It also gave opening to flashbacks…

I went back to that very first night in the hospital, the one when my world seemed to be caving in around me in that Cardiovascular Intensive Care room. Charlie lying hooked up to IVs, monitors, and the nurse in the maroon scrubs standing across the hospital crib from me, trying to keep me sane. I had a lot of thoughts that night. They began with things as simple as, “Why him?” and moved rapidly to, “how will he develop?”, “will he go to school?”, “will he live a normal life?”, “will he live at all?” How real those feelings were. How scary those thoughts were. And how much I continued to question them, for months as we lived in and out of the hospital for weeks at a time. How much I’ve questioned them every time he gets sick.

From the backseat my painfully deep thought was interrupted with, “Mom can I go into school by myself?” Going straight for the gut today eh bud? With a lump in my throat, as I tried to swallow that hospital room image, I replied, “No buddy, this is your first day of Kindergarten. But it’s not for you, it’s for me. As your Mom, I have earned the right to walk you into Kindergarten on your first day of school.”

Mya heard the lump in my throat, that refused to go down, “are you crying?”

“Yes,” I sighed, as I held back what I could. “There was a time I didn’t know if I would ever get to see Charlie go to school. There were times I wasn’t sure if we would ever have Charlie. Today is a really big deal.”

“I know Mom, maybe we should change the subject.” -If that girl only knew how sweet her heart is in those moments.

Charlie lightened the conversation with, “I didn’t know I would be so happy on this day!

-If only he knew how much his zest for life impacted those around him, and me. His smile filled his face ear to ear that entire drive. He was glowing, he was excited, he was ready. I was not.

None the less, time to take that sweet little human to school. We parked further away, and he slipped his tiny little hand right into mine as we walked- he rarely does this anymore. We took our obligatory first day of school pictures outside, his teacher had prepared some cute kindergarten signage, and then we masked up, sanitized (Thanks Rona), and walked into school.

Charlie’s always wonderful, very excited, Kindergarten teacher was ready to receive him when we got to his locker. Because of his 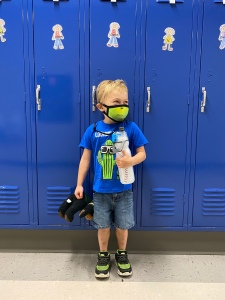 complex medical history, we were graciously able to handpick the teacher we felt best to work with him. I’ve given her the run down. She’s read, printed, and asked questions about the letter from the Immunologist. She’s viewed the asthma action plan. She knows where his metal pieces are in his body. She knows about the blood thinner. She’s asked the hard questions. She’s aware he sleeps whenever he dang well pleases. She’s put a plan in place to keep his fingers from his little mouth. And I can guarantee you that she’s prayed for every kid in that classroom as she prepares to share Jesus, ABC’s, and 123’s with them.

I squeezed his tiny, definitely not Kindergarten sized body as hard as I could. Slipped our masks down and gave him a big embarrassing Mama kiss. He was off to Kindergarten without a second look. He was ready. I was not.

I walked back through those double doors, tears swelling up in my eyelids. I held my eyes open as big as I could as I passed children and parents going to school. And when no one was looking, I closed my eyes and I let those tears come. And they came and they came. They came out of joy, thanks, and praise to God that I was able to walk him into Kindergarten.

And then, I cried for my friends, the ones who didn’t get to walk their babies into Kindergarten, they don’t get first days of Kindergarten. They are experiencing the things my nightmares are made of. And that is one hell of a lump to swallow.

How was your first day of Kindergarten?! “It was Beary good!” You could hear the thrill in his voice. He rambled on about the bear hunt, he blurted out the friends in his class from last year, and he shared with excitement the new friends he had made. His teacher sent me a photo of his beaming smile at recess.

And the lump that seemed so big in the morning, it took it’s place back in the “hidden feelings” section of my mind.

And we did it. Well, I did it. Charlie was ready the whole time.

Charlie has always been ready.

For I know the plans I have for you,” declares the Lord, “plans to prosper you and not to harm you, plans to give you hope and a future. -Jeremiah 29:11

One thought on “Kindergarten, Ready or Not!”